It's been a whole month since I posted.  Between getting ready for our trip, going on our trip, and recovering from our trip the month has flown by.  I have had many things to say, but I just haven't taken the time to say them.  So this posted will be a catch-up of sorts.  Some of the things I say will need a full post of their own at a later date, but for now I am just going to get going...

Disney was hot and crowded.  We have always visited in January when the crowds are low, and so are the crowd levels.  In June it is 90+, and although the crowds are in no way at their peak, they were much bigger than I am used to.  Still it was a fun trip.  The group of people we went with seemed to understand that you should have some time together and some time apart.  One day I was feeling a bit burnt out on the whole thing so our family ventured out on our own to one of our favorite places in Disney, Beaches and Cream at the Beach Club resort.  We ordered the kids the kitchen sink and enjoyed Disney "our way" for a while. 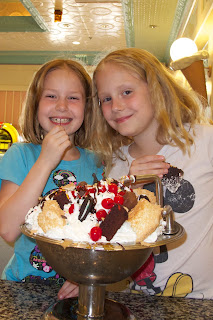 The competition was less impressive than I expected.  We did get to meet Nastia Liukin, but she seemed like she had been signing autographs all day (which she had).  She was pleasant, but not terribly personable.  They only had three age groups when almost every other competition we have gone to had four.  That put Bear in the same age group as girls nearly two years older than her.  She still held her own, but she would have places 1st or 2nd on nearly everything if the age groups were divided normally.  As it was she got 6th all around which is amazing when you remember that this was Nationals.  Her team got 1st and the bragging rights that go with being National Champions! 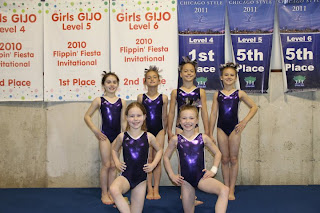 We have been diligently getting ready for Q-bert's dance recital.  She did a fabulous job, and in fact her tap number was one of the highlights of the show.  They were so in sync and the routine was so entertaining.  I think that is one thing we all noticed about the show in general.  It was very entertaining.  It seems like this studio made a show to entertain an audience whereas her last studio made a show to show-off what the dancers knew.  I think that really reflects a difference in studio philosophies.  I don't have the actual dance pictures, but here is a picture of Q-bert getting ready to go in before the show. 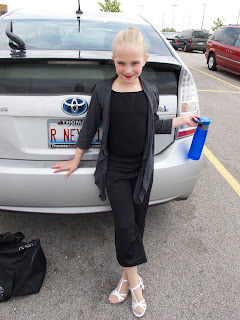 So now we are to today.  We are starting school again today.  The girls are going to be working on multiplication and a unit study of water.  They both really wanted to go back to doing unit studies, and truth be told, I think they are the most fun too.  They are A LOT of work for me though.  So considering how busy we are,  I am not sure I will be able to keep it moving forward.  I did find a bunch of nice unit studies at Curr-Click that were made by Teacher Created Resources.  They are literature based, but have hands on science, creative writing, and art projects.  So they provide a great start.

I was hoping this week would be more laid back, but between Bear's physical therapy appointments for her Sever's and her gymnastics our schedule is already quite full.  Kali has practice for her All-Star play; I am also watching my cousin's baby on Wednesday (which is a ton of fun) which is another commitment.  Also, although I didn't blog about it, I am trying to meet my resolution to take more field trips.  So far we have gone to the Museum of Science and Industry 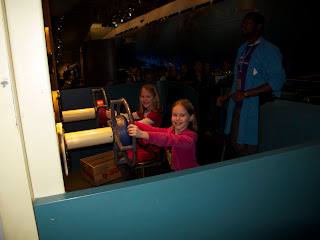 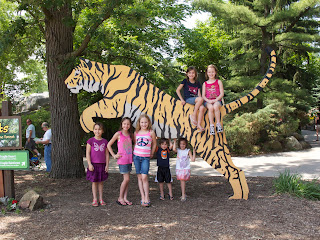 We also went bowling, but I didn't get pictures.  This week we are supposed to go to Magiquest too.  Oh and I need to finish opening our pool...

So as you can see, things are not slowing down, but hopefully I am making having fun a bigger priority!
Posted by Jen at 7:01 AM
Email ThisBlogThis!Share to TwitterShare to FacebookShare to Pinterest