As I keep saying I have so many things in my life to be thankful for.  This weekend gave me lots of reminders of how fortunate I am.

It started on Friday after noon.  Bear had a gymnastics meet in the city.  John was supposed to meet us there, and I was dreading the drive into (and back out of) the city.  Well, he called me shortly before Bear and I were planning to leave and told me he was coming home early to get us.  I was so relieved!

Bear's meet was the biggest women's artistic gymnastic meet in the world.  Gymnasts came from all around the world, and six gyms had to be set up to accommodate all of them.  It is easy to feel lost in such a large crowd, but we didn't because she has such a great team.  The girls are all great, and all the families get along too.  So as we sat down to watch our girls compete in this huge meet I felt as comfortable as if we were at our own gym.

Things began ok.  Bear had been nursing a sprained toe, and they started on floor.  The flip flop that ends the floor routine had been terribly painful, but she managed to make it through the routine, and scored 8.95.  That is not her personal best, but it is a decent score for her.  Next the girls moved to vault.   I was especially worried about her vault because in practice her run had looked awkward with her foot taped.  I couldn't really see the vault from where we were sitting, but the scoreboard showed a 9.175 which was slightly better than her personal best on vault.  The bars came next, and during warm-ups she struggled.  When her turn came I couldn't breathe through the whole routine.  When it was over I was so relieved, but anxious to see her score.  She has struggled with bars every meet, and her personal best was barely over an 8.  So I was shocked when I saw the 8.7 flash on the scoreboard.  At this point I started doing math in my head.  At Bear's gym the girls get special charms for getting a 36 all around score.  Bear REALLY wanted to get a charm, but I didn't think it would happen this year.  As I worked the numbers I realized that she needed a 9.175 on beam to make it to 36.  The beam scores had been high that day, but she had never scored anywhere near that.  Still as I watched her warm-up I saw a look of determination.  She mounted the beam, and from beginning to end she was more focused than any 7 year old should be.  Her dismount was darn near perfect.  When the score popped up 9.325 we could hardly believe it.  She had made her 36 all around.  Her teammates did equally as well, and the team took first place out of 30 teams!!!

The next day John and I went car shopping.  I need a new car, but car shopping makes me crazy.  My family never had a car payment when I was growing up, and I HATE having one now.  Still, John had done so much of the work before hand that we basically went to the dealer told them what we could afford to pay monthly, and they found us a new minivan.  Our salesman was knowledgeable, but didn't make me feel taken advantage of.  The bottom line is we are picking up our new Dodge van on Thursday.

Sunday was a lazy day at home.  Sometimes days like that make the kids crazy because John and I aren't entertaining them.  This time they took the initiative.  While we were watching tv in the bedroom  the girls decorated the living room and planned a valentine's surprise for us. 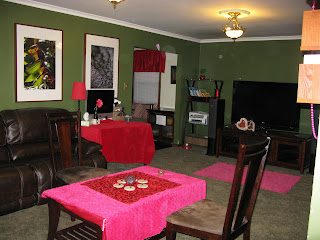 It was so sweet (and unexpected).  So last night we dined on pizza in our decorated living room as the girls provided entertainment that was hysterical.

A weekend like this makes me remember just how good I have it!!!
Posted by Jen at 5:39 AM
Email ThisBlogThis!Share to TwitterShare to FacebookShare to Pinterest

So glad you had such a nice weekend! And, again, congrats to Claire on doing such a great job! We're so happy for her!